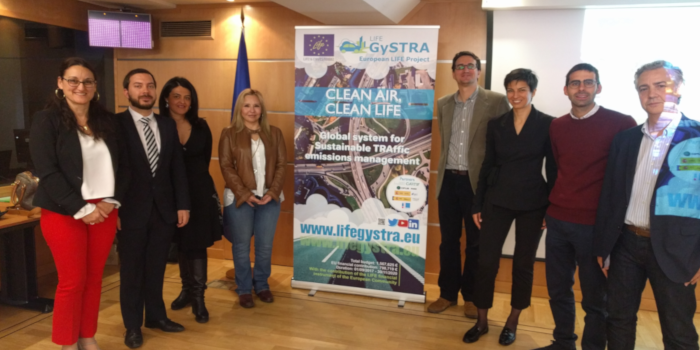 The LIFE GySTRA porject, led by CARTIF, has celebrated the event “Car Exhaust and environmental policies: the potential of remote sensing2 with the aim of explaining what its objectives are and discussing the working of the technology used, which will allow a solution to be pollution from vehicles in cities.

The consortium of the project gathered together in Madrid several national and international authorities, the Spanish Ministry of Agriculture, Fishing,Food and Environment, the Madrid City Council, the Generalitat of Catalonia and the European Commission, and experts in the sector, to discuss about the new sustainable mobility policies that aim to reduce episodes of excess pollution in cities, as well as explain the technology that will be applied.

The European Union has asked to member countries for measures to control real emissions and identify excessively polluting vehicles, responsible for 80% of the pollution generated by road traffic. During the day, the Environment General Director of the European Commission, Daniel Calleja, ensured that “the concern for air quality has increased exponentially in recent years to be placed as the second main concern of European citizens, according to the Eurobarometer”.

According to Calleja, the European Commission seeks to support projects that, on the one hand, try to solve an environmental problem and, on the othe hand, that favour entrepreneurship and innovation, generating greater competitiveness.”And the LIFE GySTRA project is an example of this” he said. This project aims to control and quantify the emissions of road traffic in real driving situations through RSD (Remote Sensing Device)

The RSD detects in less than one second the actual emissions of cars passing between their sensors. Until now, there is no system worldwide that measures the emissions of remote vehicles with the same precision.These measurements simply serve as statistical and informational data.

Daniel Calleja said that “thanks to this project, emissions can be identified right at the source and thus alert vehicles, brands and models”.With this mission, the project aims to support the efforts of the European Union to improve air quality in their countries, according to members of the consortium.

The representative of the Department of Environment of CIEMAT, Manuel Pujadas, claimed: “I hope that in the future we will see with the same normality that they control the emissions of our vehicles, as we see today that they control excess of speed”.

During the next few months, the collection of data on polluting emissions through this technology will begin with the radars that will be installed in the Madrid road network.